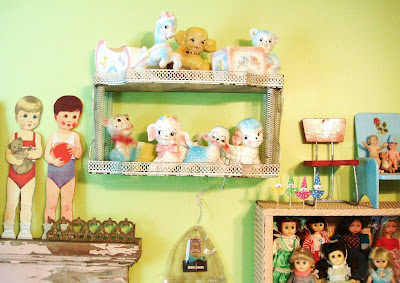 I know a couple posts ago I mentioned that my dollhouse was my latest obsession. Well, as is common with me, that's changed. Although I'm still very interested in the dollhouse and in trying to find furniture for it, I kind of want to just "find" the furniture while out thrifting, etc., and that hasn't happened yet, so I've moved onto something a little more tangible for now. I'm now obsessed with vintage porcelain figurines/planters.

You saw a few I found on my recent trip in my last post, and here are my newest acquisitions. I wasn't lucky enough to find these at cheap thrift shops, but I did find them pretty inexpensively at antique shops and on Ebay. However, I'm going to have to be careful, as they're pretty easy to accumulate! I'm already running out of room as it is! 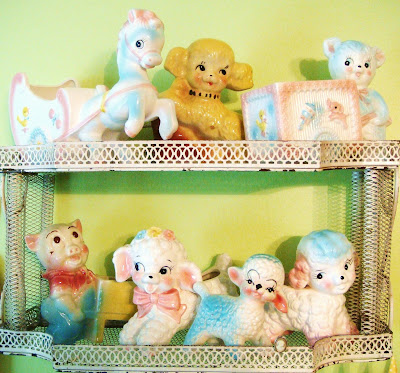 I put them on this metal shelf because I've run out of room in my other good display shelf, as you can see in the below photo. 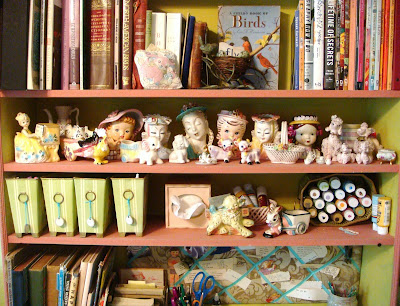 You may have seen some of this stuff when I showed photos of my studio at one time, but I've added some pieces since then. My late grandmother collected head vases, and I inherited four of them. They are all younger girls, so I've decided to begin collecting young girl vases myself as well. Here are some detail photos: 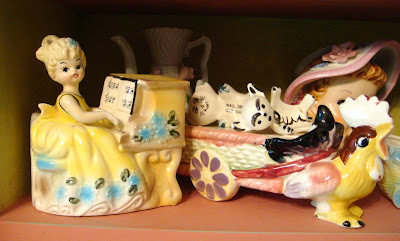 I love this little girl playing the piano. She's a recent purchase. 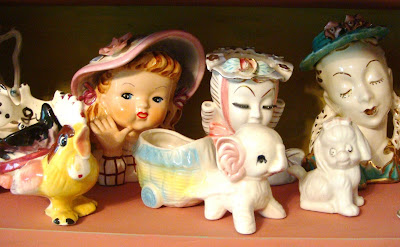 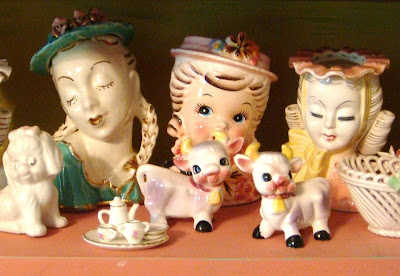 The cows I got for 50 cents at Goodwill! 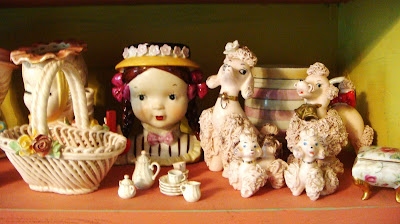 Then, besides quick trips to antique malls when I'm fortunate enough for hubby to watch the kids, here's what else I've been doing. You saw the shoe caddy project a couple posts ago-well, I've expanded my reorganizing project in Noah's room. 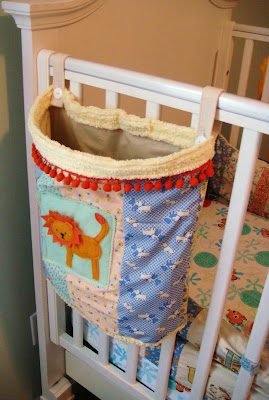 I decided to make this much-needed pajama bag to hang off his crib. I usually have the kids wear pajamas two nights in a row, so I now have a bag in which to hold them until the next night (I keep both Riley's and Noah's in there). It's a project that I wish I had thought of sooner, since it is just so much nicer and neater, not to mention cuter! And, as with the shoe caddy, no pattern for this- I just made it up as I went along! 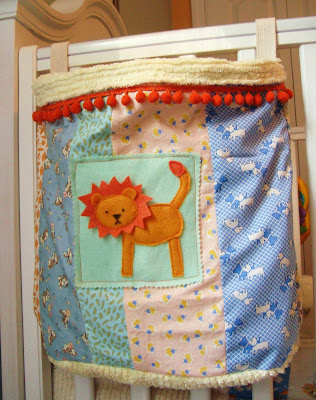 As well as sewing, I've also managed to do a couple pieces of art. First is the beginning of Noah's next book. I've kind of been putting it off, because I felt like this next book needed a change of some kind compared to all the other kids' books. I'm just getting a little bored of the same size, layout, etc. all the time. So I've decided to do this one vertically. 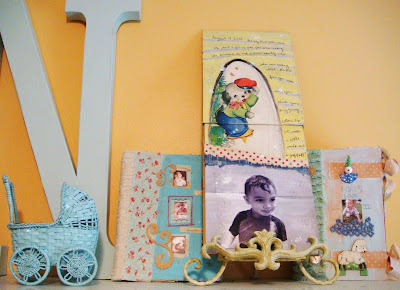 And so far, I like it! The first spread went really well, and definitely gives me different alternatives for layouts and placement. Maybe this will be a nice change of pace for me.

It's about a silly face Noah makes when he thinks he's being funny or clever- a little goofball! Here are some details, since the vertical spread is so tiny: 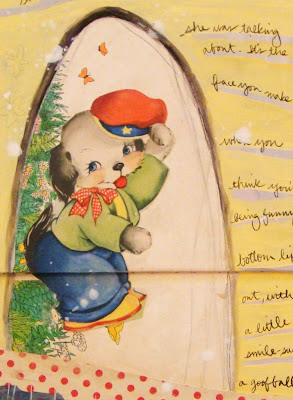 I don't know whether you can tell here or not, but I've extended the photo of him by painting the background to match the original. 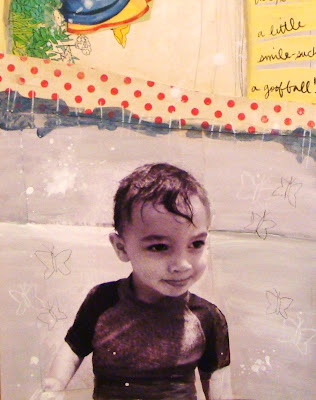 And finally, here's a piece I did a couple days ago. I did it amidst Tropical Storm Fay, which thankfully didn't cause too much damage here where I live, although we definitely had our share of rain and winds. I've put rain in the background, and bowing trees from the wind. There are also umbrellas, which are a current favorite of the kids lately. 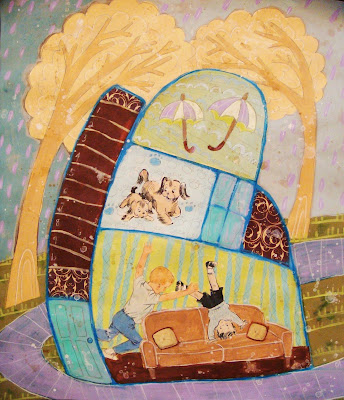 Also inside the house are images representing my two boys doing what they do probably at least three hours a day- climbing over and jumping on the couch. I swear Noah has no fear. The little boy's position in this illustration is not an exaggeration-upside-down and on his head! There's also a drawing of two puppies and pawprints. For those of you with kids, you probably know that those pawprints mean "Blue's Clues", which is a huge obsession around here right now. And lastly, the chimney has numbers written on it, because both kids LOVE counting, anything and everything! 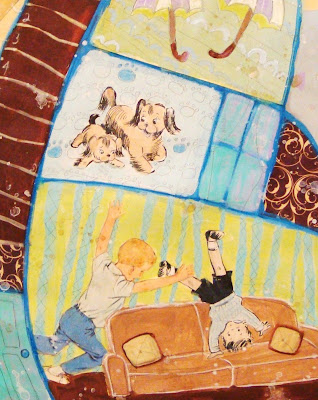 Whew! That was a long post! Probably my longest in a while! By the way, my air conditioning did get fixed, for those of you who read my last post. Thank goodness!! I hope you're all having a good end of summer!

As I was upstairs working on a piece in Riley's book today, I began feeling warmer and warmer. Since my studio is our only room upstairs (a bonus room over the garage), it tends to feel warmer than the rest of the house anyway, but today was particularly bad. Well, lo and behold, when I finally came down, guess what? Our air conditioner appears to be broken....in Florida....in August.... Ugh!!! It's going to be a long night until we can get someone in tomorrow. Hopefully it will be a quick fix! 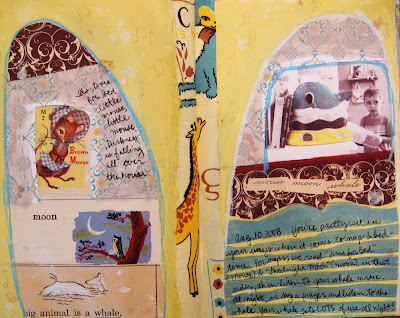 However, amidst all the heat, I did manage to finish the piece in Riley's book. It's been a busy past month. We went on two separate week-long vacations, so I haven't had a lot of time to do art, and it felt good to be back in the studio, even with the heat. The piece is about his naptime/bedtime routines, in particular his whale that plays music. I swear I replace the batteries in there at least twice a week- he plays it constantly while he's in bed- as he's falling asleep, during the night if he wakes up, and then in the morning as well. It's a well-loved part of his routine. Here's the photo I used, which includes the whale and also his two naptime books: 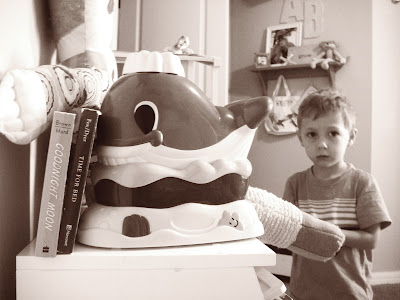 The picture at the very top of the post is one of all the treasures I collected during my trip last week. My mother and I went out thrifting/antiquing one day, and I found several cute things, which my husband of course thinks are pointless. Good thing he went golfing several days, so I can use the money he spent on that as justification! Since the first photo is a little small, here are a couple more detailed ones: 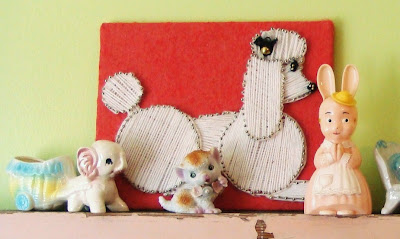 Love, love, love the little elephant with the cart! 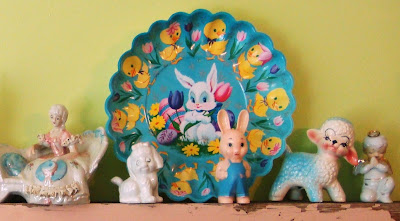 Well, I hope this post finds you all a little cooler than I currently am! Once we've got the air going again, and I can tolerate it upstairs, I am planning on doing a bit more art to catch up for all my time lost these past few weeks. You'll be the first to see it here!
Posted by Corey at 4:25 PM 7 comments: