Lots of stuff to show, but not a lot of time to write, so I'm going to make my descriptions brief! I hope the photos do enough to speak for themselves!

A piece I did while feeling parentally challenged: 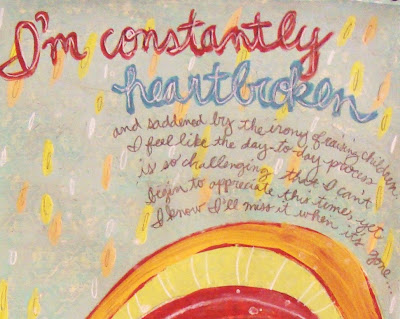 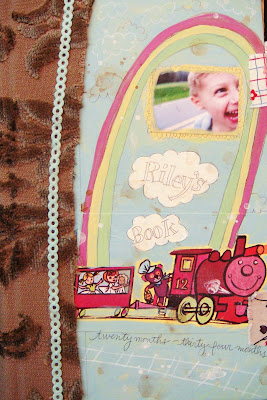 Lined up with his others:

A piece in Noah's book: 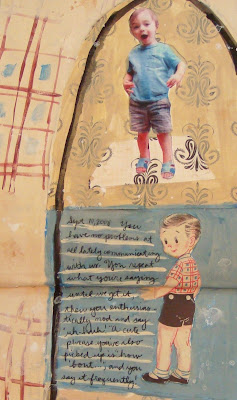 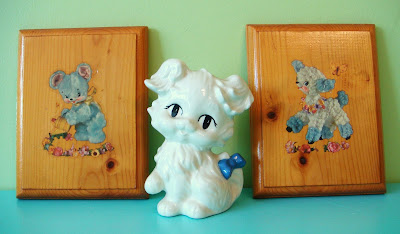 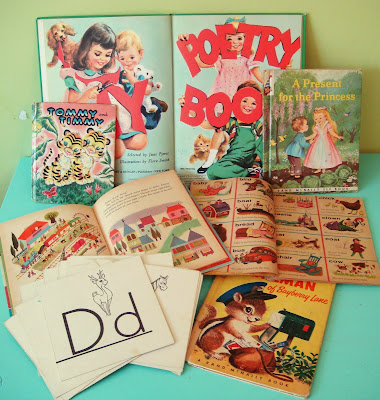 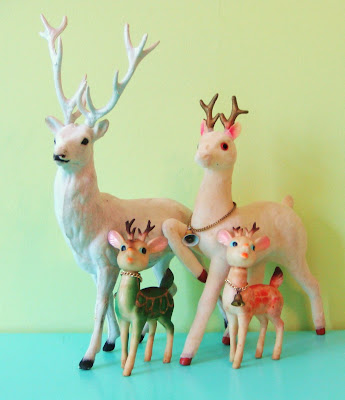 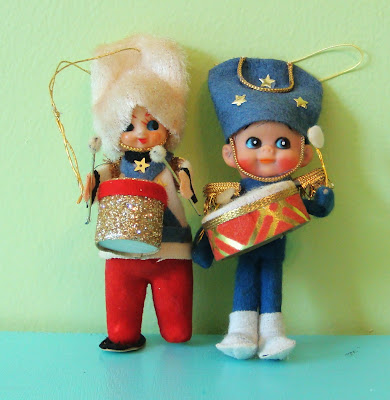 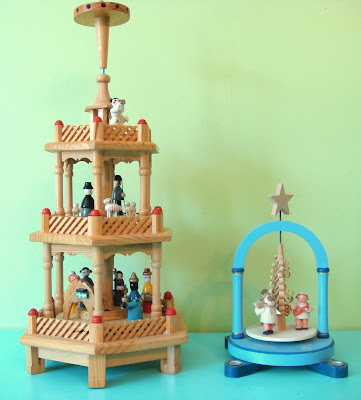 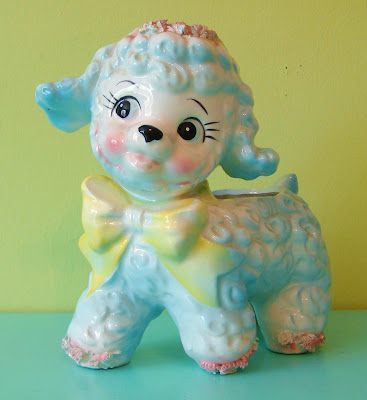 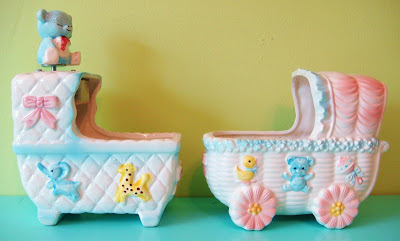 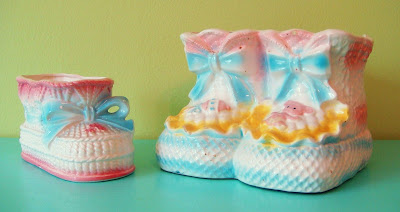 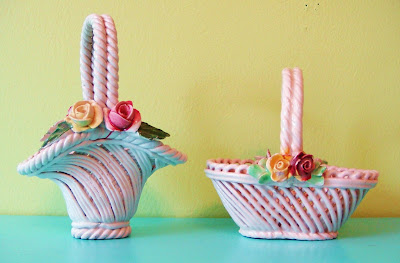 September, are you here already? We have a spring in our step in Florida, because we are heading into our "good weather" season (barring hurricanes, anyway...) I remember when I lived in Seattle, I'd start feeling depressed this time of year, because we were in for several months of gray skies. But here, it's just the opposite! I'm looking forward to several months of spending time out on our lanai, reading a book while the kids play, enjoying the beautiful weather...

Another thing that has happened for us in September is that Riley started preschool! I'm really excited about this because I think he'll have so much fun, but I also can't deny the wonderfulness of only having one child to care for during those four hours, twice a week! Anyway, here is the spread I did in his book about his first day. He was so cute with his little backpack! 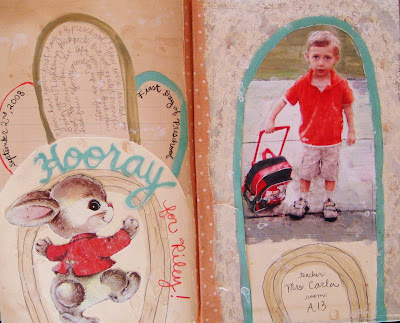 Then another spread from last week as well. It's about Riley's obsession with counting. He counts to twenty constantly! This has got to be one of my favorite pieces of late. Everything about it just fell into place effortlessly, and I love the results. Don't you love it when that happens? 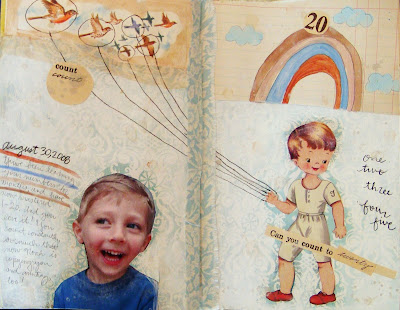 So here's another project I foolishly took on last week. A couple years ago, I made a small photo holder out of vinyl. It held probably six photos in a vertical format. It was so nice and easy to make. So I somehow got the idea to expand upon that and make a huge, multi-photo, did I mention HUGE? version of that idea. Boy, was that a dumb idea! In the planning stages, I just never took into account that I was going to have to be feeding this huge mess of vinyl through my little sewing machine! Ugh! Needless to say, it was difficult. 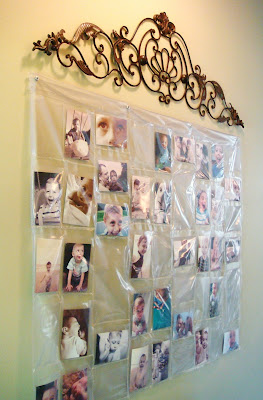 But I stuck with it and finished it, and above is the result. I have to say, for as hard as it was to make, it's amazing it turned out as well as it did. The biggest problem with it is that most of the vinyl is wrinkled. It wouldn't be so bad, but I have it hanging in a hall where you can't view it except for at an angle, so all the wrinkles catch the light, as you can see in the photo. But, nevertheless, it is handy. I can fit so many photos in it, and change them out really quickly. It's a perfect solution for photos that aren't "worth" framing, but special enough to display...
Okay, so on to some vintage finds for the week. As I mentioned, I only have one child to take care of while Riley's in school, and Noah is MUCH easier to shop with than Riley, so he got to accompany me to lots of fun places! An antique mall and a couple different thrift shops, lucky him!

I found these pipe cleaner guys (standing in front of Erika's painting) at the antique mall, and I just love them! 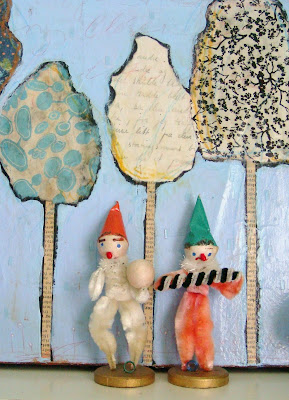 And this piece from the same place as well. This is actually one unit that expands or contracts to become short and squatty or long and narrow. 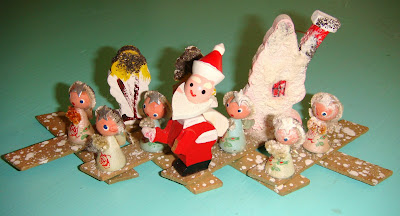 All of these guys except for the little girl came from Goodwill (she was at the antique mall). I love the bunny headvase-he fits in so well with my other headvases, but also with my various "cute animal" planters, and he still has his sticker and 1963 date on the bottom! 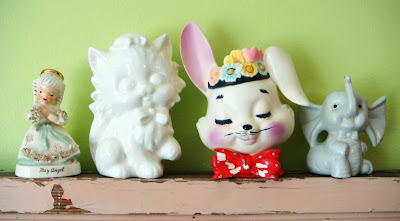 Lastly, I was tagged by Erika to tell "Six Strange Things" about myself. I know I've done this before, but I'm sure I can come up with a few more quirks! Here goes:

1. I have a thrift store obsession. It's probably fairly obvious, but perhaps not for the reason you think. While you may think I go for the collectibles, I really go for the toys. I am strangely obsessed with getting good toys for CHEAP. I would be embarassed to show you how many toys my kids have (it's enough to outfit a small daycare, for sure!), but I swear, I didn't pay more than $2 for the majority of them! I go to thrift stores at least three times a week (I would go more often,but we just don't have very good ones around here!). My husband thinks I'm crazy, but he can't really complain, seeing as it's such a cheap hobby! And the collectibles that I find are really a bonus!

2. I also have a "cute skirt" obsession. I own more skirts than I can count, but again, see my above quirk. I get most of them at thrift shops! If you've never looked at skirts at your local thrift shop, take a look- people get rid of a lot of really cute ones!

3. You may not know if after reading the above quirks, but I am also really into "minimizing". I constantly go through our stuff (toys and skirts included) and get rid of anything we don't need or use. It's a good thing our community has a biannual garage sale, because I've always got a pile to get rid of!

4. My current favorite sandwich is avocado and mayonnaise on toast-yum!

5. Can't remember if I've listed this before, but I have almost no sense of smell.

6. I'm embarassed to admit it, but I'm strangely fascinated by a lot of pre-teen sort of TV shows. Right now, one of my current faves is iCarly (a Disney show). Granted, I only watch it when I'm looking for something mindless, but I have to admit I like it!

Okay, whew! My arm's about to fall off! I hope you all have a great week!