A Gazillion Pictures of My Studio

Hi Guys! I know that several times I've mentioned working on my studio and have promised photos. Well, finally I've taken the time to actually shoot them! As you can see, there are lots! I went a little crazy, but I know that I'm always interested to see the littlest details when I see others' workspaces, so I figure others share that sentiment as well.


But before I begin the tour, I just want to mention that there are still a few signed copies of my book available (see my last post for details). Thanks for all the orders thus far, but you've still got a chance if you are interested and thought you'd missed out! And on the same note, I've also still got several grab bag ephemera packs available. Still haven't taken the time to list them on Etsy, but again, you can order them directly through me if you'd like.
Okay, enough business, on with the tour!
So my studio is located in a bonus room we have above our garage. It's a really large room with its own bathroom and large closet- a perfect setup! We have potential future plans to also use this room as a playroom for the kids, but since they're so young, it really is mostly mine for now. And you can definitely tell that from the decorating!
Here is a view from the far wall with a large window on it. The doorway you see leads downstairs. That corner with the desk is my main work area. We have a sectional sofa for when the kids start coming up there a bit more, because it sort of separates the room into "my area" and the "kid area": 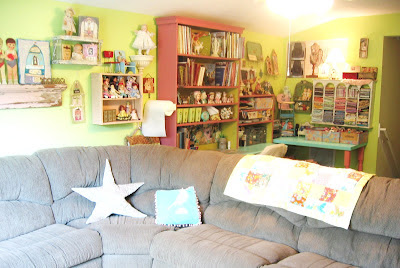 Here's a better view from the opposite side of the sectional, etc.: 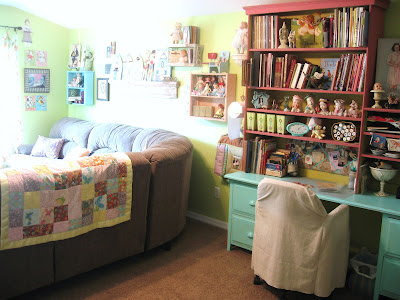 And again from the window wall. There's the stairwell, and the door into the bathroom. The only part of the room that isn't really done is those large cubbies on the wall. They're great for storage, but they're real ugly. I think we may put doors on them or something...: 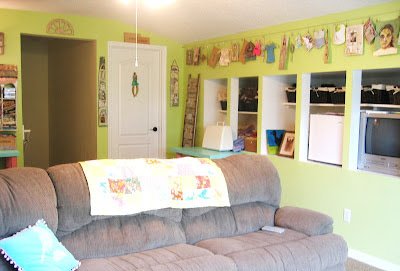 The window and again, those ugly cubbies...: 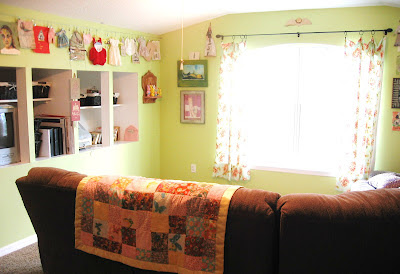 Here's a closer shot of my desk. You may remember this desk that Jason built from my last house. I've repainted the base...: 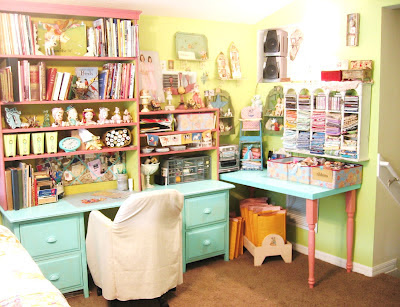 And an even closer shot of the bookcase portion: 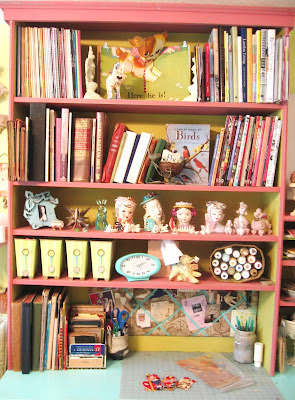 Even closer. The head vases were my grandmother's: 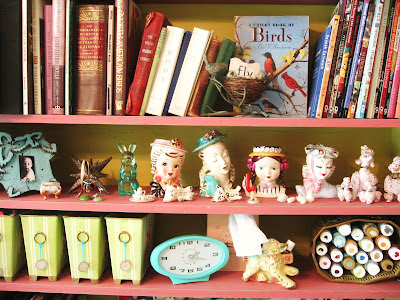 Here's my workspace. It's pretty cramped, but that keeps me less cluttered, because I have no room to make a mess! 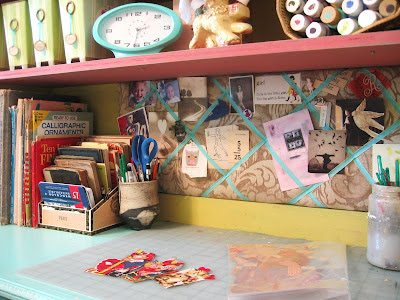 Here's a little table on the side. There are boxes of scrap fabric, ribbons, etc., and my CD player there. Above the table are all my cotton fabrics and my CD's. Again, another ugly cubby up there- that one we will probably cover over, because it's really too high to be very useful: 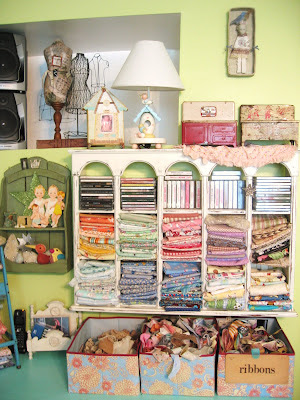 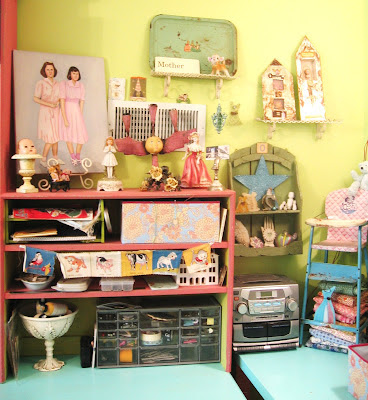 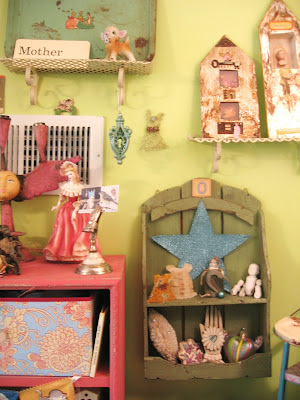 More of the same!: 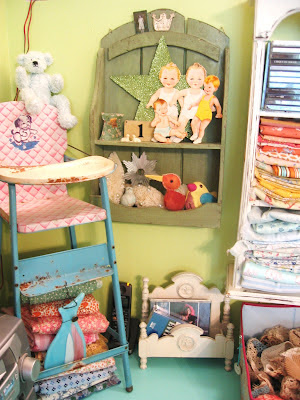 Under the table is this old doll bed which I just found at Goodwill for $3! Right now it's holding all those ephemera packs that I still have- see, I told you there were lots left! You know you want one...! 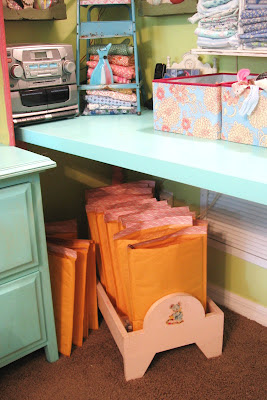 You could probably see in the far-away shots that I have this wire strung along the long wall, holding all kinds of bits and bobs. I love it! Easy display of whatever strikes my fancy at the moment! It's from Ikea, if you are inspired to do the same...: 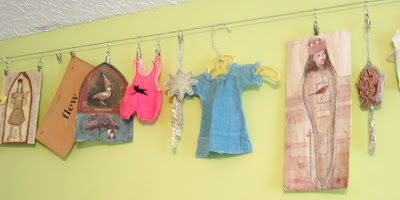 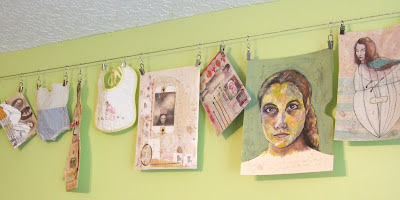 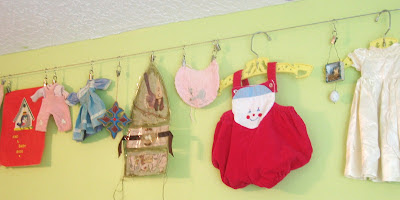 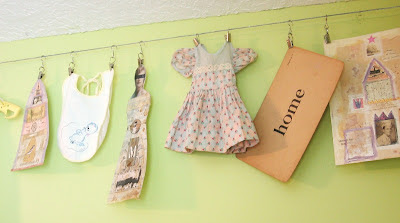 Here's some display on the other long wall above the couch. I used to collect teddy bears and dolls when I was younger, so you see some remnants of that here. This is the only place in the house where I can put this stuff! Oh, I so need to have a little girl someday...: 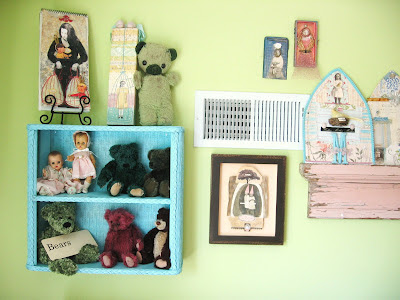 Here was a great Ebay find. Two paper dolls who look just like my two boys! Blond/blue and brown/brown! I'm sure you'll be seeing these images in my artwork: 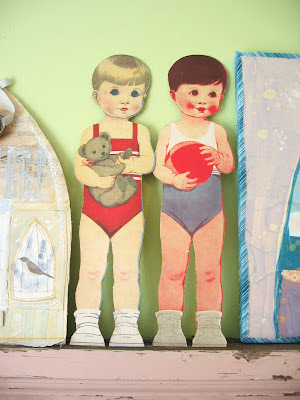 On the right side of the window. My mom thinks it's weird that I have children's book illustrations hanging with the nude painting. When I hung them, I honestly didn't even think about it- they were all just things I love in colors I love. That's an artist for you, I guess...: 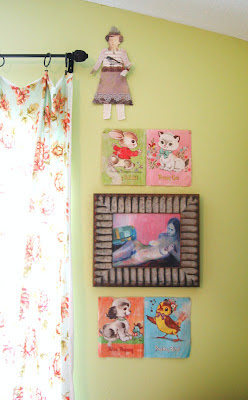 The left side of the window. You may recognize the doll from the sneak photos of my book!: 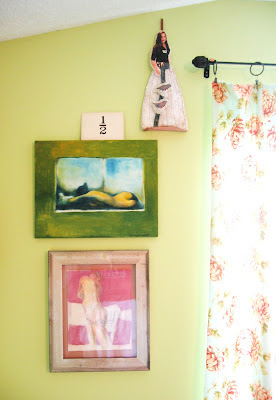 Here's what I did with the vintage highchair back from Jamie. A perfect little shelf for these bunnies!: 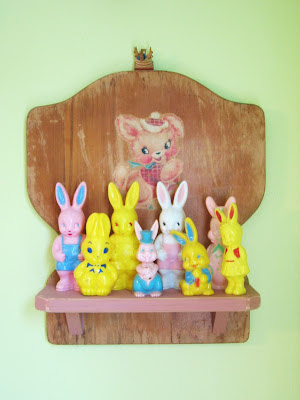 Some more dolls, etc. from the couch wall: 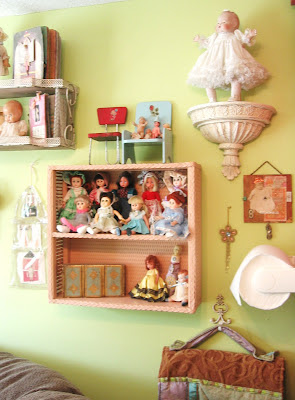 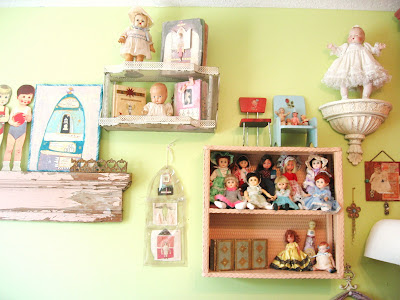 Here's the doorway into the bathroom: 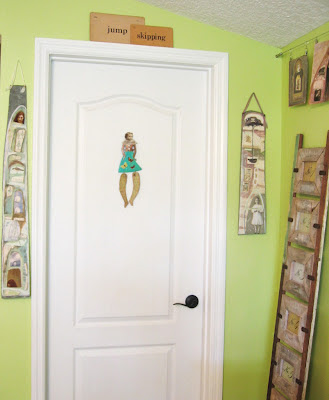 Here's the bathroom. I found this really pretty shower curtain from Target. I don't know how well you can see it, but there are birds on it: 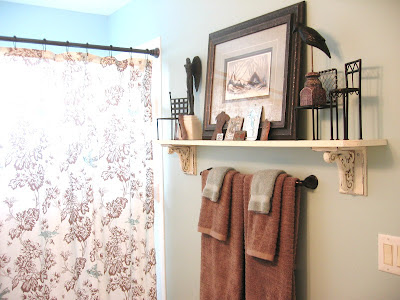 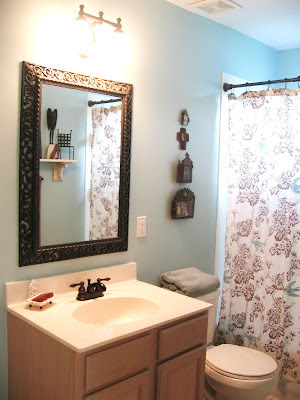 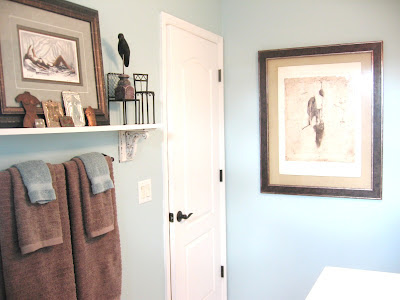 And I think that's it! I will list these photos on Flickr, so you'll be able to blow them up and see larger versions. But that will have to wait a bit. Right now, I've got a baby whining from his crib at me, so I'd better run! Hope you enjoyed the tour!
Posted by Corey at 3:42 AM

I LOVED the tour! Thank you so much for sharing it. It has inspired me to go fix up my little corner. You did a wonderful job and I am so jealous of your space!! Go take care of that baby crying!!

Corey Thankyou for taking the time to take these photos, its so interesting to see other people's art studios.
these photos are fabulous !!! Wow, your studio looks great....oh how I envy you!
It's so tidy and neat aswell !!

I particularly love your grandmothers doll heads ~ I would love to own something like that!!
Also, I LOVE the old fashioned paper dolls from your vintage books and your vintage shelves, there great!!!!

Like I've mentioned before, I LOVE everything that you make. You always amaze me with your talents !!

so pretty! i love the colors!

What a wonderful space to be inspired. Wow. Everything is wonderful. No wonder you do such marvelous work! Thanks for the tour!

Wowee!! I shouldn't be surprised, but your space it so organized!! I'm so jealous. I love the colors and I can see why it would be very inspiring to work in there (and take naps on the sofa!) xoxo, Tonia

Beautiful things all so sweetly arranged!! Your studio looks like your artwork - lovely and whimsical and sweet. Thank you so much for sharing and like the other commenters, I am amazed by how neat and tidy and organized you are...with two littles....how DO you do it?

and,,,, it looks like you get a lot of sunshine, unlike the pacific northwest, huh?

Love that green color, its yummy.

What an inspiring room! Thanks for sharing, loved all the pics!

fabulous pictures!!! I adore your studio. I love the things hanging on the walls!! :-)

I remember Tonia talking about you. I feel lucky to have her as a friend. Your workroom is amazing. Wow!

I just found your blog! I love your craft room...as I was looking through all the pics...I saw your shower curtain...I just bought the same one a couple of weeks ago! You gave me some new ideas on what else to do in the bathroom! Could you tell me the name of the paint and color that you used in there?! Smiles...Joy.....

Hi Joy, I hope you check back here-I didn't have an email to write you back! Anyway, if you can believe it, I actually mixed that paint color myself using several leftover paints we had! But I basically just tried to match the bird images (maybe a little lighter)- sort a of a grayish blue...

Hi Corey,
I love it that you share photos of your living space. If there's anything I'm more passionate about than art, it's interior decorating, so keep the photos coming! I wonder if you miss your studio closet? I thought that was so neat.

These photos are beautiful. I have so many ideas now, thank you for sharing them!

What a fabulous peek into your space! I can see how such wonderful art is created there!!! Looking forward to seeing your book! CONGRATULATIONS!

Thanks for sharing your wonderful space! WOW, I'm so inspired to really "clean up my act"! On the other end of the spectrum, I've hosted a messy studio contest which I called, "WE BARE ALL". All professional artists/designers who posted pics of their messy studios. visit http://brendapinnick.typepad. I'm going to add you to my blog roll!

What a sweet and darling studio! I just love all the happy colors. I want to come and play!

I just found your blog after reading your book :) I was looking at the studio pictures wouldn't the cubbies be pretty painted the color of your desk? then used as display-just a thought
I love love love the book!!

Oh, Corey, your studio is stuffed full of wonderfulness! I could just sit and stare at it. I especially love the way you hung the old highchair on the wall! How clever-- I have my husbands highchair from when he was a baby-- didn't know what to do with it, now I can't wait to hang it up!!
I think those cubbies would be super cute with mismatched windows hinged on one side. Hey, thanks for sharing!
Tammy

I particularly love your grandmothers doll heads ~ I would love to own something like that!!
Also, I LOVE the old fashioned paper dolls from your vintage books and your vintage shelves, there great!!!!

Very nice site. Really i got some most important which i don't know before. Thanks for making this article this is really great.