I think I have finally finished decorating my 1906 dollhouse!  I know small things may change, but it's done for the time being at least!  If you'd like to know a bit of the history about this house, see this post.  Because there are so many photos, I think I'll break the tour into two or three posts.  We'll begin with the bottom floor of the house. 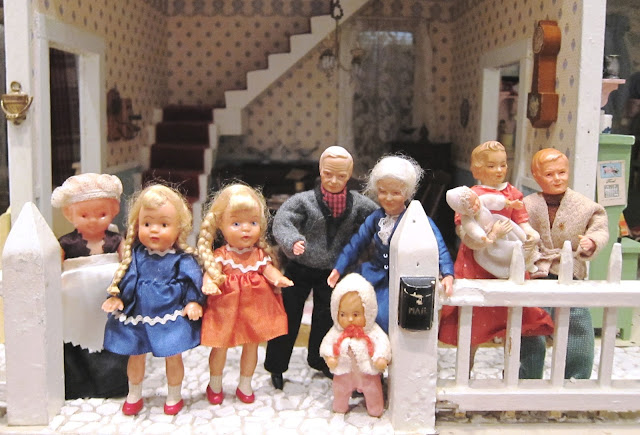 But first I'd like you to meet the family.  I think this family will be named the Sanborn's, because the original dollhouse family that inhabited this house had that name.  So we have Mother, Father, Grandma, Grandpa, Blue Sister, Red Sister, Toddler Girl, and Baby.  There is also the nice maid who works for them.  I know that some of the members of the family are a bit out of scale to each other, but I don't mind!  And as you'll see in the tour, there are also several pet cats and dogs who live here as well.

Because the house doesn't really have a "front", this opening in the fence serves as their front entrance.  Notice the mailbox on the fence and door knocker on the wall behind them. 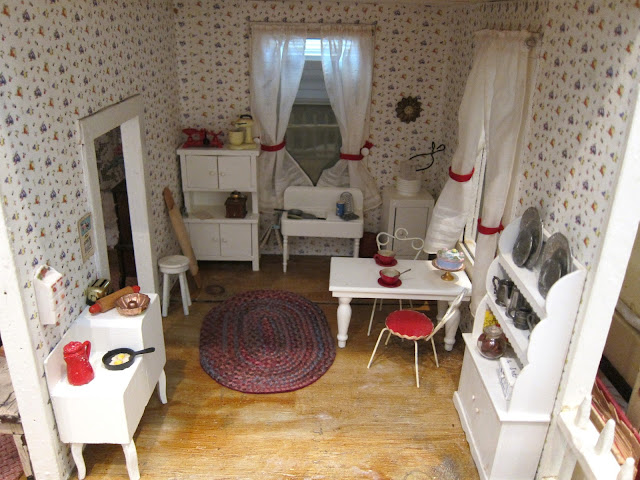 The first room in the house is the kitchen.  Here is a photo of how it looked when I purchased the house.  Mostly whites and reds. 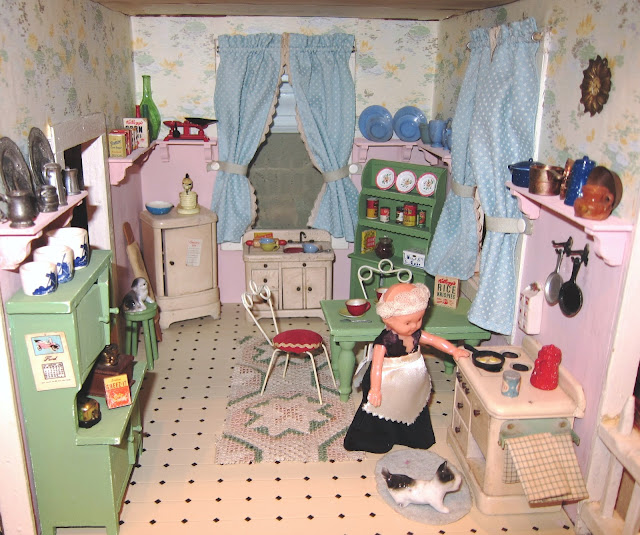 I wanted a more pastel theme to the house, so as you can tell, I revamped it!   Pink walls and shelves with pastel wallpaper to accent.  I made new blue curtains as well.  The maid is busy cooking, while one of the resident puppies looks on and hopes for some scraps. 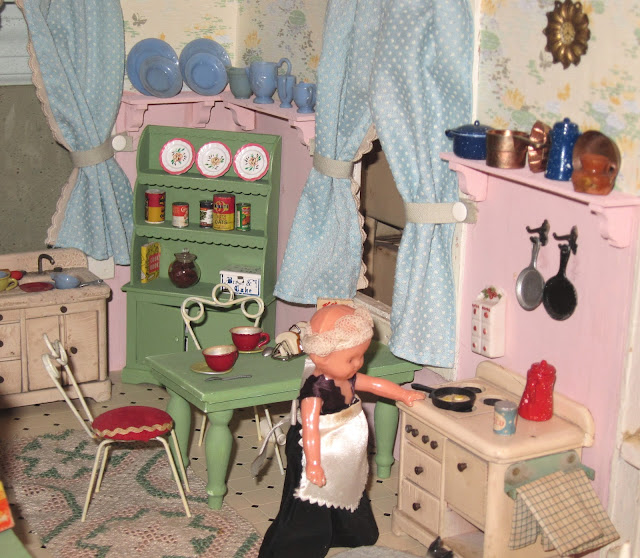 The Strombecker furniture (as well as a couple other misc. pieces) that had came with the house had been painted over white.  I could tell that the original color was green, so I tried to match the color and repaint them. Once they were repainted, it was a bit too much green in there though, so I kept a few pieces, and added another set of offwhite vintage kitchen furniture.  I'm not sure of the maker, but I love it! 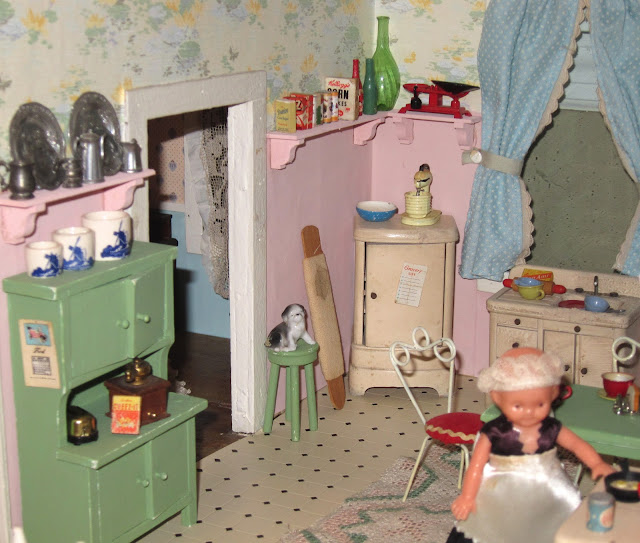 Another puppy sits on the stool across the room, relaxing. 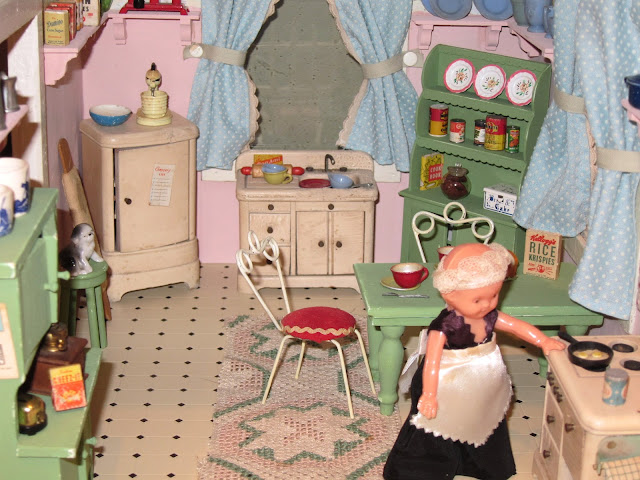 Such a cheery little room! 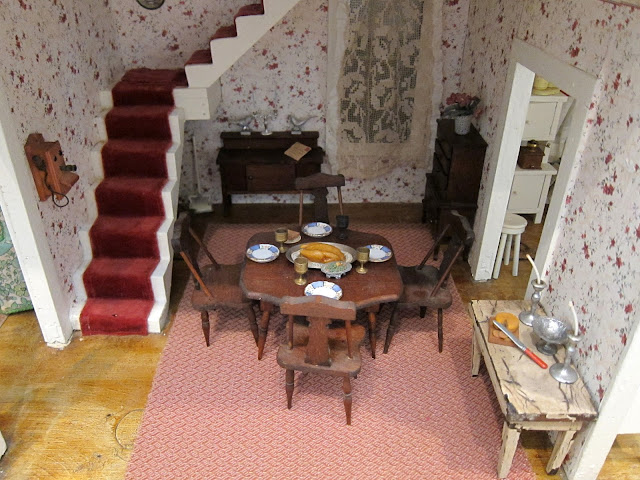 Next we have the dining room.  Here is how it looked when I got the house.  Again with reds and whites. 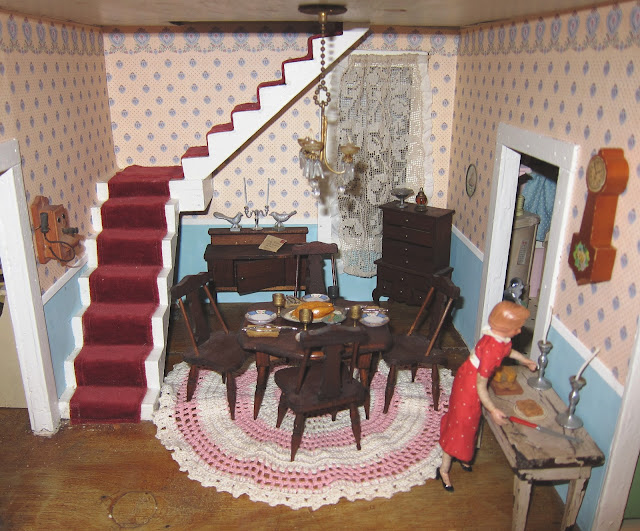 As you can see, I tried to add a bit more color with paint and wallpaper. 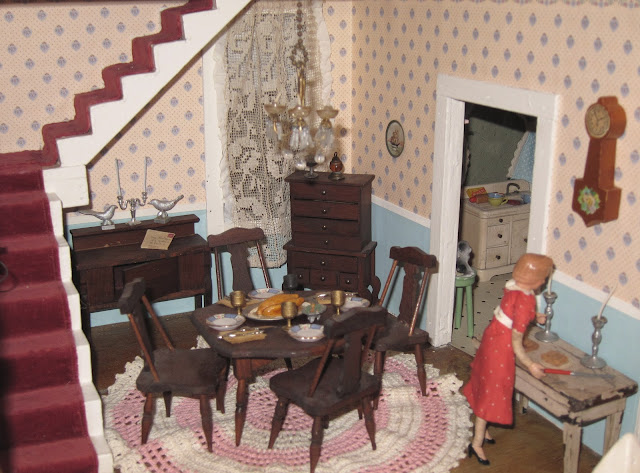 Mother is getting ready to light the candles.  It looks like it's almost dinner-time! 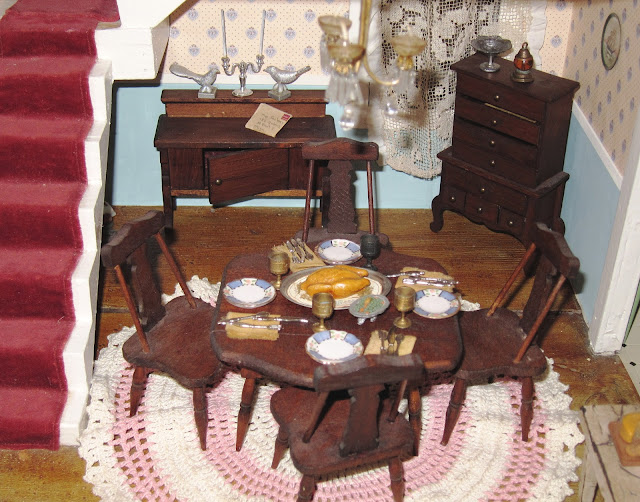 Pretty much everything in this room was originally with the house.  I only added the rug and the clock on the wall.  I'm unsure of the furniture's maker, although it seems like it's fairly old, German-made. 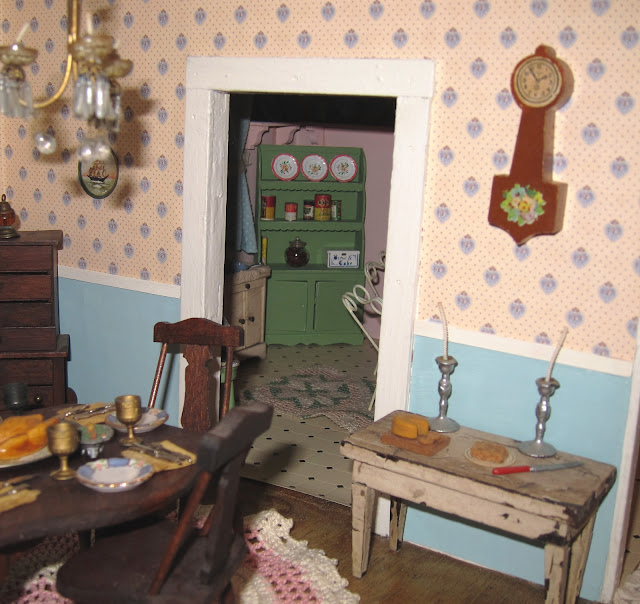 Here's a closer look at the cute clock on the wall! 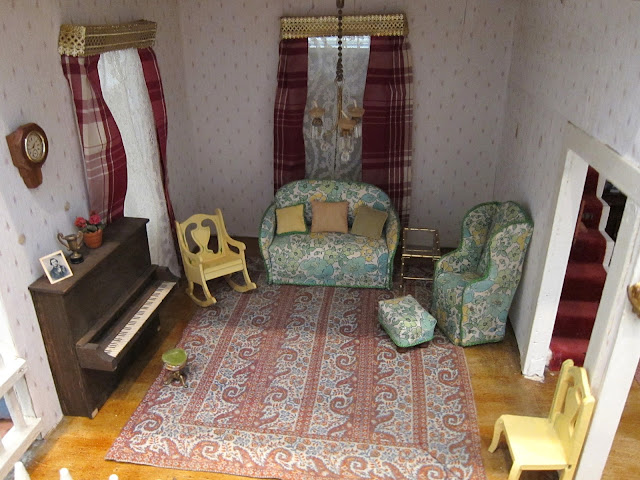 The last room on today's tour is the living room.  Above is the original version.  Cute, but a little "blah". 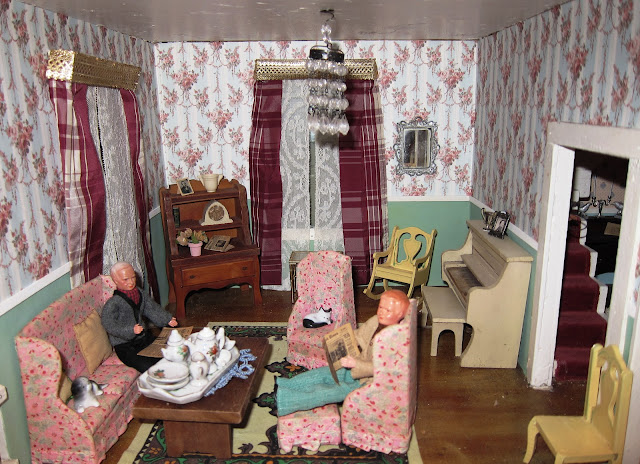 Now it's a little more jazzed-up!  I kept the curtains, but changed the walls and most of the furniture. 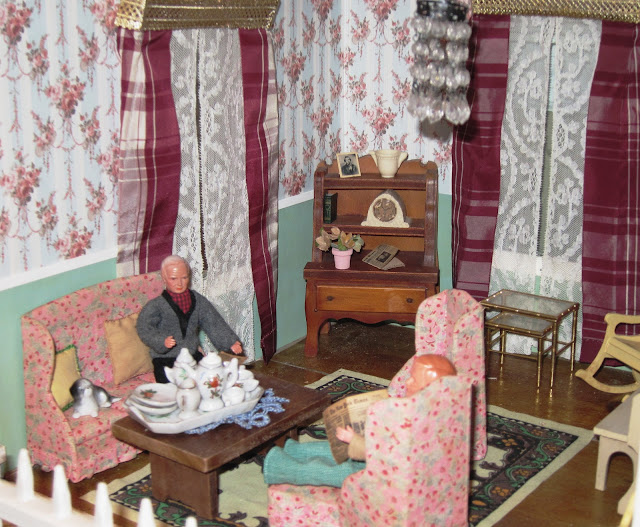 Father and Grandpa like to read their newspapers in here while they have a little tea.  Another puppy sits on the couch with Grandpa. 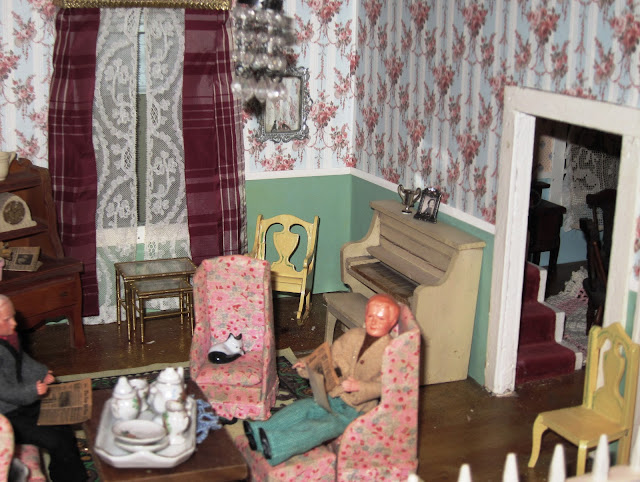 And a kitty curls up on the chair! 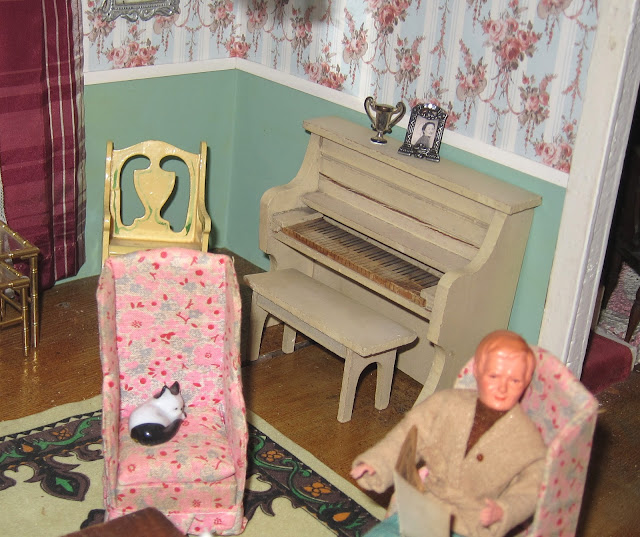 I love this old piano that I found!  As with most of the furniture in this house, I don't know the makers of the pieces in this room.  But I like the eclectic look that brings the house.  All mismatched and cozy!

And that concludes this portion of the tour-I hope you've enjoyed it!  Still coming are the master bedroom, the landing, the patio, the nursery, and the bathroom.  I'll be back with those soon!

So beautiful! I love all the pretty dishes, and really everything!! Thanks for sharing! xo Heather

Oh my word. I can't believe how darling each little detail is. Love the little blue pitchers up on the shelf. Corey this is such a gorgeous makeover...smiles..Renee

Such a darling family for your beautiful house. I'm completely smitten with the tiny shelves that border the kitchen walls. I'll be coming back to visit this post over and over.

Oh how precious! I love the piano and the dad's feet propped up and the little animals in the house! I could live in that little house!
Dorothy

The shelving/chair rail in the kitchen is a brilliant idea! Great job!

Hello Corey. As this is a old post, I'm not sure if you'll even see this. I started collecting just a few years ago. I found some beautiful quality, and very reasonably priced, dollhouse furniture at an antique store. I knew it was old--but I didn't realize HOW OLD--until I started researching. It turned out to be Strombecker, from the 1930's. Well, now that I owned several rooms of beautiful furniture, I just HAD to have a house to put it into. RIGHT? The house that I eventually got is a homemade job that probably dates to the 1940's. I am currently using it, but it needs to be completely renovated. Old, ugly wallpaper pealing off. Old, ugly linoleum tile bulging up. You get the picture. So, looking at at these photos inspires me to empty out my little house--which needs a THOROUGH spring cleaning anyway--and start attacking some of the remodeling issues. My kitchen is furnished with a few pieces of 1920's German furniture, but mostly with the 1936 Strombecker pieces I had originally purchased. I had no

With the exception of some Strombecker candle sticks and wooden bowls, I had no "little" things to go in my kitchen. So I JUST bought a bunch of little German, and little (what I believe to be) Tootsie Toy metal plates and cups and pitchers etc., as well as several WONDERFUL old pieces of plaster dollhouse food. I have not been able to find any old cabinets or shelves, so I think I am going to borrow your idea and put wainscoting up the walls to little shelves as you have done, in order to display my vintage metal pieces. (I recognize several of your pieces as matching mine!) Sorry for such a long post, but I have know no one else who speaks 'DOLLHOUSE'. I hope to hear from you. Thanks for the ideas and the inspiration. Nice to meet you! Kevin

Unknown said...
This comment has been removed by the author.
8:11 AM

Hi Kevin! Nice to meet you! Isn't it nice to meet other dollhouse-lovers?? I'm so happy that my house has inspired you! But I still consider myself a novice in this hobby- this 1906 house was my first real vintage house (I have several more now, but I still have a LOT to learn!).
You really should take a look at the "My Vintage Dollhouses" blog. She has a fantastic collection, and so much knowledge on all the furniture and makers, etc. Florine's blog was what inspired me to continue with my collection, and she has links to so many other collectors as well.
Again, nice to meet you, and I'm sure we'll "meet" up again in this little community!